South St. Paul, MN Contract for deed Homes.  It’s a city in Dakota County, Minnesota, immediately south and southeast of Saint Paul, Minnesota. It is also east of West St. Paul, Minnesota. The population is 20,160. Historically, the town was notable as a major meat-packing location. Subsequently, many residents are descended from immigrants of Southern European and Eastern European heritage, who came to work in the meat-packing plants in the early twentieth century.

A post office called “South St. Paul” has been in operation since 1888. The city was named based on its location, south of St. Paul, MN.

South St. Paul schools were established in 1853. At that time, the schools operated under the name Kaposia School District, serving the sons and daughters of local residents, missionaries, and the Kaposia Village Native American chiefs. Initially under the jurisdiction of Dakota County, the district included sections of West St. Paul, Sunfish Lake and Inver Grove Heights.

In 1887, the county turned over the administration of schools to the newly incorporated cities and their councils. South Saint Paul Special School District #6 was officially designated a school district in 1890, when voters established an independent Board of Education.

Rapid growth in the city, and its schools, continued in the 1950s and 1960s, culminating in the 1970s when more than 6,000 students attended six elementary schools, a high school, and a junior high school. However, in the 1980s, enrollments in the South St. Paul schools began to decline and the community was forced to make the difficult decision to consolidate school buildings.

During the same period, advances in technology required the school district to be networked to keep up with the next generation of learners. In 1999, the South St. Paul community passed a technology referendum to maintain the quality of education in South St. Paul Schools.

Holy Trinity School opened on September 7, 1954 with an enrollment of 243 students. The building consisted of 8 classrooms and a cafeteria in the basement. The school offered grades Pre-K through 8. After September 7, 1954, the size of the student body expanded at a rapid rate. By the beginning of the 1963-64 school year, the enrollment exceeded 600 students. After a drop in enrollment, attendance bottomed out at 80-plus students during the 1984-85 school year. In this same year, a half-day kindergarten was added to the regular 1-8 grade program. The following year, an all-day everyday kindergarten was established. A preschool was then added in 1988. It has since grown, and now has several more classrooms and athletic programs.

Saint John Vianney Church now rents out their space to a charter school. 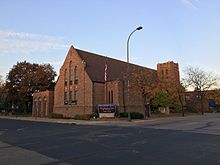 Established on October 25, 1887, CMUCC was founded by Charles W. Clark.

The church has gone through many remodels and building changes throughout the years. CMUCC has even been struck by fire, but the faithful parish rebuilt the church. The mission of the church is to support the local, state, national and global interest of the congregation.

CMUCC also supports the ministry of the United Church of Christ, as programs and needs arise.

The church also participates in citywide events such as Kaposia Days and On the Road Again Days.

St. Stefan Romanian Orthodox Parish was founded in 1923 by Romanian emigrants; but the physical church’s construction was finished in 1924. On June 27, 1924, the parish was officially incorporated as a religious non-profit organization. In 1935 the church was blessed by Policarp Morusca, the first Romanian Orthodox Bishop in America.

St. Mary’s Coptic Orthodox Church of Minnesota originated in the early 1960s, at the urging of Bishop Samuel, who annually visited Coptic student groups at various American universities. At that time, approximately ten Coptic graduate students, some with families at the University of Minnesota, met for Christian worship.

The Church of the Holy Trinity was established by Bishop John Ireland in November 1917; but it was not until June 1940 that the first resident pastor, J. F. Siegienski, was assigned. Holy Trinity was originally a Polish parish. The first Mass was held on June 30, 1940. The church building and the rectory were built by 1942 and the church was blessed by Archbishop John Murray in 1942.

St. Augustine parish was established on June 11, 1896. Fr. Joseph T. Busch organized this new parish, served as its first pastor, and oversaw the building of the church. On August 30, 1896, Archbishop Ireland dedicated the original church, which stood on the southeast corner of Fourth Avenue and Grand Avenue, where the Greystone Apartment building now stands.

After being remodeled, expanded, and reinforced with brick on March 31, 1923, the church burned to the ground. Doing their best to replicate structures of the old church wherever possible, builders were able to construct the current church structure for a Christmas Day 1924 opening.

The parish still hosts The Argument of the Month.

Though originally separate, these two churches were merged into one in 2010, as part of the Archdiocese of Saint Paul-Minneapolis’ strategic plan and reorganization of parishes.

Because of the population increase of South St. Paul following World War II, St. John Vianney Parish was established on July 5, 1946 as the third Catholic parish in South St. Paul, under the direction of Father Harold Whittet.

Because no church or school had yet been built at the time of establishment, the parish rented the pavilion at Kaposia Park and held its first Mass there on July 28, 1946. Groundbreaking ceremonies took place on August 5, 1946 and the original makeshift church was constructed from two Army barracks. The church opened for its first Mass on the Easter Vigil, April 5, 1947. Shortly after, a roller-skating rink was built in the basement of the church to raise money.

The Sisters of St. Casimir, a Chicago-based Order, formed the school’s first teaching staff. By 1958, the school contained grades one through eight. Construction was completed on the rectory and parish offices in 1960. The original makeshift church building of two army barracks was razed and the worship space was moved to the lower level of the school building (its current location).

In 1974, a preschool and kindergarten program were added to the school. From that time until 1989, the school was staffed by the School Sisters of Notre Dame. The fall of 1992 saw the establishment of a full day kindergarten program as well as an extended day program. During the 1996-1997 school year, the St. John Vianney Little Learners Preschool became fully accredited with the kindergarten through sixth grade program.

In May 2000, SJV expanded its facilities with the addition of the Parish Life and Community Center, which includes a gymnasium, kitchen and cafeteria, meeting rooms, and an extended gathering space. The addition was completed in March and dedicated on May 19, 2001. The current priest is Terry Beeson.

To view all homes for sale in